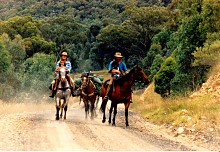 Glen Davis is an old shale mining town located 70 kilometres north of Lithgow in the Capertee Valley, Glen Davis constituted the only attempt to commercially produce petrol from shale oil in Australia.

In the Glen Davis park there is an amenities block and a number of B.B.Q’s. Camping is allowed. There are no petrol or general store facilities.

From Lithgow take the Mudgee Road across the overhead pass, driving past the Wallerawang Power Station. Following the Mudgee Road you pass several coal mines until you reach Capertee. Turn right onto the gravel road and follow the road through beautiful scenery and spectacular escarpments.

Oil shale was first discovered in the northern side of the Capertee Valley around 1865 by local grazier Mr. B.R. McLean. Glen Davis still has the largest seam of high grade oil shale in the world. The first shale oil lease was granted in 1891 to MPI Mining Development which later abandoned the scheme. This site was the centre point for the future development.

The wartime petrol shortage caused the Government to organise a revival of oil shale mining and treatment in 1940. Mr. G, F, Davis of Davis Gelantine undertook the proposed development and a new company was formed (National Oil Pty. Ltd.). Much of the equipment from the abandoned Newnes oil shale works was transferred to Glen Davis.

A pipeline was built so that products could be pumped to storage tanks at Newnes Junction. The pipeline followed the route of the Newnes railway line which was removed in the 1940’s. In 1940 the first oil was produced and in 1941 some 4,273,315 gallons were produced. 170 miners were employed.

Initial housing conditions were deplorable. Lack of schooling facilities, unreliable food supplies and endemic diseases accentuated the already poor living conditions. By 1947 the situation had improved. A hotel, barracks, staff cottages and permanent housing had been built. The town population of 1,600 had access to a school, post office, hall, cinema, bank, chemist, butcher and general stores.

By 1950 production levels were dropping and operating costs were continuing to rise. The years of industrial trouble, difficulties with retorts, Labour, material shortages and the importing of middle east crude-oil finally led to the closure of the works in 1952. The plant was sold at auction. 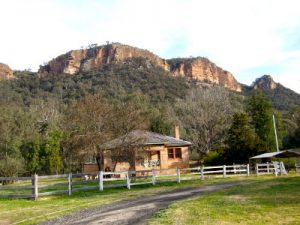 Our holiday property in the Capertee Valley at Glen Davis, The Poplars has 2 cottages providing updated services and furnishings.