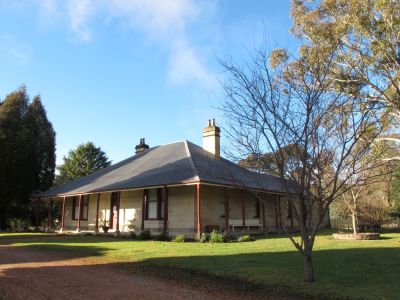 An historic home and outbuildings built between 1841 & 1866 for Thomas Brown, an early founder of industry in the Lithgow region.

The rare intact colonial estate includes a domestic smithy, stables and unique hexagonal garden folly. The museum houses a collection of Victorian furniture and nationally significant Lithgow pottery. Also on display are items that reveal the social history of the Lithgow region, including the locomotive “Possum”, which was used at the Lithgow Blast Furnace. The Courtyard Gallery has regularly changing exhibition of works by local artists.

The house, built from local sandstone in 1842 for Thomas Brown, the man who first established the coal industry in Lithgow, stands in a hectare of beautiful lawns and gardens. The four front rooms have been preserved much as they were in Thomas Brown’s day, and contain some beautiful early Victorian furniture.

Also displayed are many fine exhibits of the early history of the district, a feature being an excellent display of Lithgow pottery and artefacts from the pottery works. The covered courtyard at the rear is used as a museum and exhibits include a Hansom cab and a Pennyfarthing bicycle. The locomotive “Possum”, which was used at the Lithgow Blast Furnace, is displayed in the grounds of the museum.