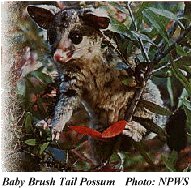 Kangaroos and wallabies are usually noctural …. the joeys of the larger macropods have outgrown the pouch by eight months of age. There are 48 species of macropods. Four occur in the A.C.T.

Macropods vary in height from 0.4m to 2.0. Many small macropods have become extinct due to habitat alteration, competition from rabbits, sheep and predacious foxes.

The red and grey kangaroos are not in danger of extinction. These spies have benefited form increases food an water made available when land was cleared and dams built.

Kangaroos and wallabies belong to a group of animals known as macropods:
macro means large, and pod means foot.

Dingoes were probably brought to Australia thousands of years ago. Unlike domestic dogs, dingoes are found throughout the Australian mainland from desert areas to the mountains…. they breed only once during the year and have litters of 4-6 pups. They eat what is easiest to catch or find and even catch echidnas. They are known to interbreed with domestic dogs.

Dingoes are mostly tawny- yellow but creamy- white and black are common.

Dingoes do not bark like domestic dogs but howl instead. This occurs mainly just before and during the breeding season. Younger members of the pack do not breed but help look after the pups by bringing them food, and even water.

They occasionally live in pairs but more often in packs which are probably family groups.

Bat’s wings are actually their elongated arms and hands, with skin stretched between the fingers and joining onto the legs.

In some Bats its skin also includes the tail, forming a pocket with which they catch and hold prey caught in flight.

Bats roost upside down during the day in tree hollows, caves under bark and in roofs of buildings. They are only mammals having true flight. In winter bats go into a type of sleep or torpor. Bats are not blind. Sight is important especially on moonlit nights. Most small bats eat insects while the larger bats eat fruit and blossom.

There are about 50 species of bats in Australia. The smallest bat in the A.C.T. weighs only 3 grams. They emit high pitched sounds similar to radar to locate food and obstacles in their flight path.

The LYREBIRD lives in the wet eucalypt forests. The male lyrebird builds several mounds of soil on which he displays and calls. The male has very long tail feathers and early scientists thought they resembled the shape of an ancient Greek instrument: the LYRE.

The best time to hear the lyrebird’s call is in the winter. They eat grub, worms, millipedes and termites which they obtain by scratching in the ground and leaf litter.

Although it can fly, the lyrebird spends most of its time on the ground.

At Tidbinbilla the male lyrebird mimics the call of the Kookaburra, Crimson Rosella, Thrush two types cockatoo and many others. The female builds a separate dome-shaped nest in which she lays only one egg. They are shy birds so if you wants to see one you must walk quietly.