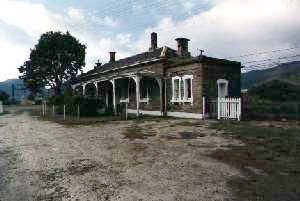 The small village of Bowenfels forms an outer suburb of the bustling Centre of Lithgow. The few remaining buildings, now bypassed by a busy highway, give little indication that this was in fact the birthplace of settlement in the valley, long before extensive beds of coal were discovered there.

The quiet official opening of Bowenfels Railway Station in October 1869 provided the impetus for the growth of Lithgow and all industrial development that followed.

Brief History:
The small village of Bowenfels forms an outer suburb of the bustling industrial centre of Lithgow. The few remaining old buildings, now bypassed by a busy Great Western Highway, give little indication that this was in fact the birthplace of settlement in the valley, long before extensive beds of coal were discovered there.

Lieutenant George Bowen, Assistant Government Surveyor, crossed the mountains soon after his arrival in the colony in 1827. During his early explorations, Bowen blazed a track from Meadow Flat, through Wallerawang and the Lithgow Valley, up Brown’s Mountain and on to join the Bell’s Line of Road. This was to become the original stock route used by all drovers who moved sheep and cattle from the inland stations to Markets in Richmond, Windsor and Sydney.

In later years, the village established as a coaching rest point on the Bathurst road was named in his honour. Pioneering settlers of the area were hot on Bowen’s heels. In 1927 James Walker, a Scot, received substantial land grants at Wallerawang. Others came after and a predominantly Scottish community grew up as Walker was followed, first by Andrew Brown, whose estate surrounded the site of Bowenfels, and then by the Reverent Colin Stewart, the first Presbyterian minister of the area, Thomas Sheedy and Thomas Brown, the driving force in the district’s coal-mining industry.

Despite this early settlement, the area languished until the completion of the ZIG ZAG Railway with its western terminus at Bowenfels. The quiet official opening of Bowenfels Railway Station in October 1869 provided the impetus for the growth of Lithgow and all the industrial development that followed.

Lithgow named after William Lithgow, an early Auditor-General and ex-officio member of the first Legislative Council, grew as a natural consequence of its mineral wealth. The railway provided first a ready market for coal mined in the area and, secondly, available form of transport for manufactured products.

For all its future significance, this original railway siding received little recognition. A report of its opening stated simply: ‘the Railway was opened from Mount Victoria to Bowenfels on 18th October 1869 without public ceremony, Bowenfels being the first station in the valley’. The report went on to state that, as the sidings were not finished on that date, no goods trains could be accommodated until a month or so later.

Despite such a low-key approach to the official opening, little effort or expense was spared on the construction of the railway buildings which survive today in the station and station master’s residence. Both were finely crafted in sandstone by the contractor, G. Watsford. His work remains a tribute to his craft.

The Building:
Quaint and rustic, in the midst of a built-up modern area, the railway buildings have a distinctly English air. With their steeply sloping slate roofs, attractive verandahs and intricate work in both stone and wooden joinery, they conspicuously lacked any stamp of a uniform government building.

Built on simple rectangular plan with verandah front and rear, the station included a ladies’ waiting room, main waiting room, ticket office and station master’s office. Housed in small rooms on either side were the luggage room and ladies’ washroom. Considered of lesser significance, the gentlemen’s toilet was a smaller room adjoining the ladies’ washroom.

The small waiting rooms appear strangely misproportioned with their five and a half metre (eighteen-foot) ceilings and exterior walls 35 centermetres (fourteen inches) thick. A fireplace positioned in each room catered for the comfort of passengers.

New South Wales Government Railways engineer, John Clifton, was responsible for the design of the building, which is described today as one of the finest examples of railway architecture of its period on the western line.

Both the station and the residence served their original purpose until Bowenfels was closed in 1974. despite the dramatic growth of Lithgow in the latter part of last century, Bowenfels, for many years continued to be recognised as the major centre.

The trains still roar past, a far cry from the clatter and hiss of steam signalling the more stately arrival of their early counterparts, but nevertheless another chapter in the evolution of transport to the west. (Exerpts taken from ‘Survivers in Time’) 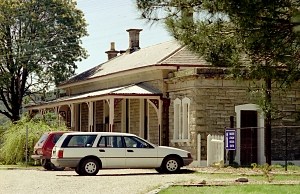 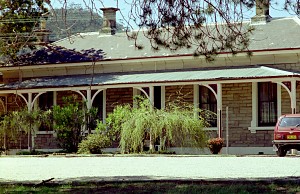 Photos taken around 1996 by Debra Morris

The Bowenfels Railway station building was tastefully restored by the Greater Lithgow Tourism Association to house the Lithgow Visitors Centre in 1994.

The Visitor’s Centre was up until 30 June 1998 managed by the Greater Lithgow Tourism Association Inc. The Association was a non-profit organization funded by Greater Lithgow City Council, Tourism NSW, Local Business Operators and sales from souvenirs and promotions. The Centre has always offered an excellent service to both Visitors and Locals alike.

The Centre has now been taken over completely by the Lithgow City Council. We now have a new Visitor’s Centre situated opposite the historic Bowenfels Railway Station.